Fourteen years ago as first time parents of a 3  month old baby, Joe and I  loaded up and headed to work at a church in a city that was 12 hours away from where both of us called home.

We immediately realized we had a lot to learn about our new home, Cape Girardeau, Missouri.

Lesson 1.  “It’s ‘Cape’ not ‘Cape Girardeau.’   If you use the full name of the city in conversation people immediately know you are not from Eastern Missouri.

Lesson 2. (which was almost a deal breaker that first month) Mexican food and Texas style BBQ were not considered local foods like they were in Texas or Southern Oklahoma.  There wasn’t a Mexican restaurant on every corner or a place to buy homemade tortillas.  Buying avocados would break the bank.

We found ourselves saying, “What is this cole slaw doing on my sandwich and where in the world is the beef?”

The fact that I made my own salsa and my husband could smoke a brisket made us somewhat of celebrities among our young adult friends we were making.  What they lacked in guacamole and beef, Southeastern Missouri made up for in hospitality and dinner rolls…if you could catch one.

Lesson 3.  Don’t go to South Cape alone.  Well, this is what we were told.  Those who know me know that was like a challenge to me.   I often found myself driving on the “edge” of South Cape desperately wanting to pull over and get to know the stories of the people that I saw on those streets.  I was an outsider to this part of the country, but it was evident to any passer-by that there was a great cultural and socioeconomic divide in the city that had become our new home.  My heart that has a bend towards justice, love and mercy ached with each drive across town.

From the people at gas stations who would have me repeat something I would say because of my Texas style accent, to the amazing doctors and hospital staff that helped us bring our daughter into the world, Cape had quickly found a place in the hearts of our family.

We only lived in Cape for two short years.  These were the years that I was learning to be a momma of two new babies.  Joe was in his first full-time staff position at a church. We purchased our first home.  It was during those two years that I was determined to finish my seminary degree before our second child came along.  At the time online courses were few and far between so this was no easy feat.

To say there was a little stress in our family and in our home during those days would be a laughable understatement.  However, there honestly was not a day that went by in those almost 800 days of calling Cape our home that there was not someone in our new church or community that made us feel that we were welcome and wanted as part of the community.

We left Cape with deep love for the city and friends that had become our home away from home.  However, we also carried with us words spoken to us and over us by a couple of people that made us wonder if those two years had been a waste.  Though 99% of the people we had gotten to know were nothing but supportive and encouraging to us, all it took was the 1% to leave wounds that took years and years to heal.

Was there really a place in “the church” for a man who is kind, gentle, and compassionate and actually feels called to help kids and families one on one instead of ministering to the masses?  And what about a woman like me who is gifted with leadership skills whose heart has reached out to the marginalized since she was a child and who has often and erroneously been labeled too “liberal”?

The next several years were spent healing the wounds and believing in the calling God had placed on our family.  God was precious to surround us with cheerleaders during the years following our years in Cape.  He placed us in a church that challenged us to dive deeper into the Word of God.  My sweet husband found his passion as he began working one on one with children and families, and I found mine teaching marginalized teenagers in summer school.

It is hard to believe it has been well over a decade since we left Cape.  Our home away from home friends have never stopped checking on us and believing in us.  Two of these friends came to see me in Tulsa  last year for a girls’ weekend.

The weekend was filled with everything we love that connected our hearts the first time we all met.  Great food.  Nonstop conversations filled with laughter and stories of our soon to be teenagers.

These are the friends that the conversation always turns to what some would label “social” issues.  From what types of homeless ministries are in Downtown Tulsa (and of course we went to serve at one that weekend) to my friend’s orphan care work in both Ethiopia and her own community to the other friend’s ministry she started to adults with special needs in the Cape area.

We made it back to our hotel from dinner one night, and I said to my friend, Becca.  “Hey come over here to my computer and read some of these emails from an organization called CarePortal that  we now have here in Tulsa.”

CarePortal is a one of kind network that links local churches to the state foster care system to meet the needs of children in the  state’s custody.

Then, I may have half jokingly said, “Cape needs this.  You should start it there.  I can give you the number of my friend Chris and he can connect you to Missouri people I’m sure.”

Honestly, I wasn’t really joking.  In my short two years of living in Cape, I had seen the immense socioeconomic and racial divide of the city.  We spent our days serving a church family on the side of the city that was far removed from “South Cape.”   I fell in love with the people in our church there.  People with beautiful hearts.  However, I always wanted to get to know someone from the other side of the city and I never did.

During our two years in Cape my days were filled with being a stay-at home momma of 2 babies under 2 and trying to nurture friendships in my church.  However, I have never forgotten the images of the homes and the people that I saw on those drives where I broke the rules and drove the streets of South Cape.

Today, I stood in a room with a judge, social workers, criminal justice workers, pastors and church members trying to hold back tears as I watched CarePortal launch for several counties surrounding the city I called home for two years.

Watching the state workers sit in disbelief that someone has come to help them do their job of taking care of the needs of the families they work with every day.

Listening to the heart of the judge who makes decisions about parental rights.

Hearing a social worker with tears streaming down her face read a need request of one of her families.

Praying over a judge in a courtroom where he makes decisions that impact a child and a family  forever.

Watching churches in the community step up to the plate and say, “We can help.”

Absorbing the fact that in one rural county we visited, there were 16 children this past week who were taken into state custody.

Seeing all the strings that God had been weaving together for years and years to bring us to this day.

I didn’t know that I had become somewhat of a celebrity in SE Missouri.  “Oh…you are the Holly from Oklahoma”

I heard this over and over that day. Social workers.  A Judge.  Pastors.

They all thanked me and I just shook my head and made sure they knew that my amazing friend Becca had been doing ALL the work for nine months to get CarePortal launched for them.

And all I did was go on a girls’ weekend with friends.

The more I thought about it, I decided it really was much more than a girls’ weekend that started all of this.  CarePortal launched in Southeast Missouri because over a period of years and years God was crossing the obedient steps of those following him into the unknown.

From state workers to stay-at-home moms, from judges to church staff, the people I met this weekend are really just regular people willing to wake up every day and put into action those things they deeply believe in their hearts…that every child and every parent deserves someone to come along side them and give them hope.

I told my girls’ weekend friends that I would go through all the dark days linked to our two years in Cape again to get to this past weekend.

If just one family is rehabilitated and reunited…

If just one foster family gets a need met that they are struggling to meet themselves….

If just one child finds his or her forever family….

Worth it.  It was all worth it.

I worshiped this morning with the church family that loved us during those difficult years.  As we sang together phrases like

“It is well with my soul”

“Spirit lead me where my trust is without borders” and

“I hear a voice and He calls me redeemed even when others say I’m not enough.”

We often don’t get to see our pain redeemed in this life.  I am forever grateful that I got to see a glimpse of just how God was guiding the steps of our family even when it felt like none of it made sense.

Yes.  I am the Holly from Oklahoma.  And I am the luckiest person in the world to get to live life with some of the world’s most amazing people who are doing extraordinary things. 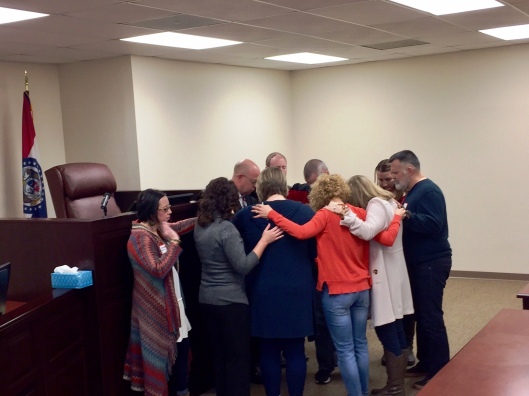 This the courtroom where this judge makes decisions on behalf of the state.  To hear his heart ache for the families in his community was something I will never forget. 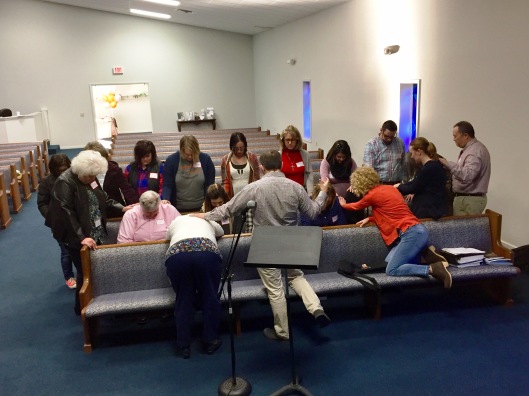 A group of church leaders and state workers praying and crying together over the children in the system in their rural communities. 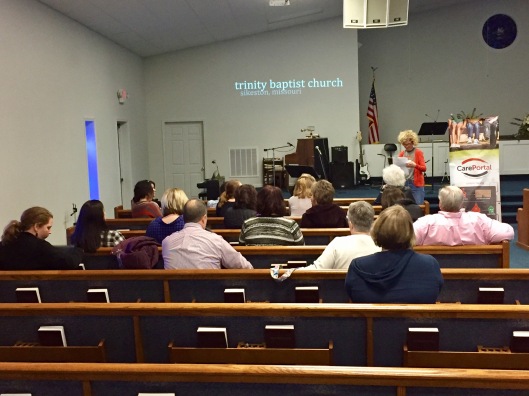 The CarePortal lead for Southeast Missouri, Shelly, whose passion for people oozes out of her every word and action. 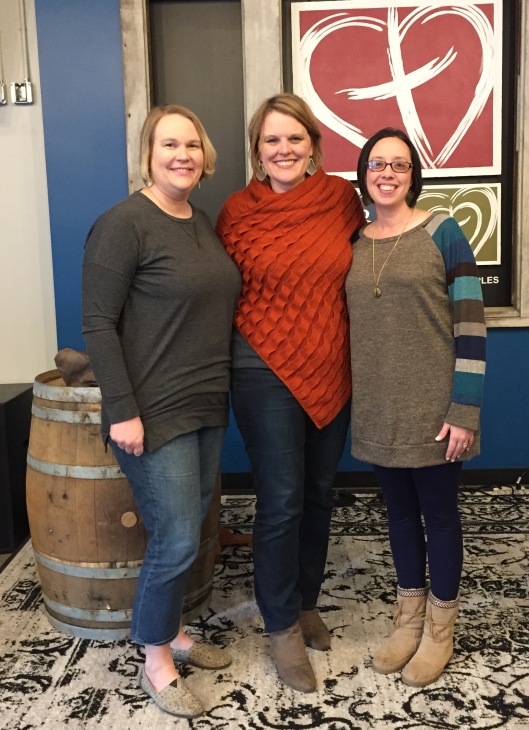 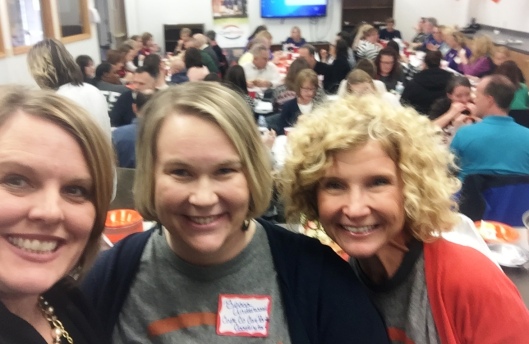 If there is not a selfie it didn’t really happen 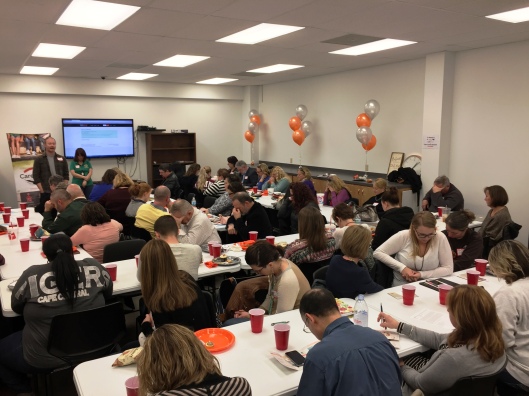 A local pastor praying over the roomful of church leaders and state employees as they link arms to meet needs of families in the system. 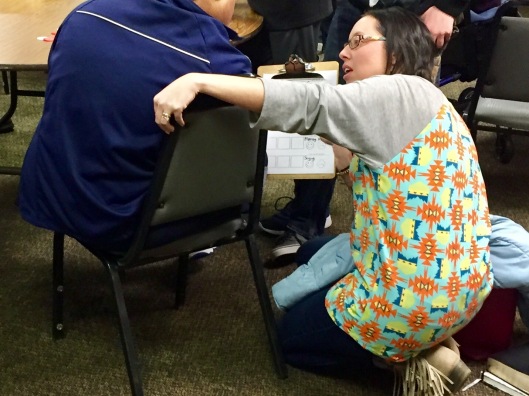 My amazing friend Andrea working with one of the members of her ministry to adults and teenagers with special needs.