In 2006, my big sister convinced me to sign up for this thing called ‘MySpace.’  She thought it would be a fun way to keep in touch with each other and all our childhood friends. In true Monta fashion she once again persuaded me, a full-time public school teacher and mother of two kids under the age of 4, to create a MySpace.

In those days, if I had 2 hours of free time…they were precious and few and far between.  So, I decided to only get on MySpace when I felt ‘prompted’ by the Lord.

I know I risk being tagged as being over spiritual by saying this, but I think that most of us know we live in a generation of people who waste many hours of precious life breaths sitting in front of a computer or looking at a phone.

I have to plead guilty to this accusation, and so I have to put boundaries around myself and ‘spiritualize’ social media so that my ‘virtual friends’ don’t get more of my time than my family and ‘real life’ friends.

Yesterday I dared to get on Facebook.  My NewsFeed had me all over the place emotionally.  I laughed at pictures of some of my friend’s kids doing funny things.  I was joyful at the sight of a picture of a friend holding her twins who were born at 24 weeks and have defied the odds of living.

I got frustrated when I read an article posted by a friend that made me feel that I was ‘average and headed for unhappiness’ if I didn’t want to be rich like Oprah and Donald Trump (I would like to stack my joy and blessings up against those two any day!!!)

Then the tears came.  Pictures of the twin towers.  Pictures of the American flag.  Stories of ‘where I was when I heard.’  Then there was the video of my beloved seminary professor, Dr. Fish (click on it…he is amazing!) who passed away.

Next were posts and pictures from friends from my hometown who were praying for a precious 18 year girl, Raven, (who happens to be the daughter of one of my sister’s best friends in high school) that was in a car wreck on Friday night.

Not long after I had perused Facebook, I got a call from my sister.  Monta had heard from Raven’s mom, Tammy, and Raven had gone to be with Jesus.

September 11th.  It has taken on a whole different meaning for a precious family and my small hometown.

Last night, as I listened to my daughter read to me as we lay in her bed, I tried to hold back the tears as I remembered what my sis had told me Tammy had told her on the phone, “Hug your kids tight tonight.”

I began thinking about the significance of this day…September 11th.  It has deeper meaning to me with each passing year.

I got up and remembered that several years back I had written out my story of ‘where I was when I heard’ on September 11th, 2001.  I searched my computer files.  I searched this blog and my Facebook notes.  Then it dawned on me.

I hadn’t been on MySpace in at least 4 years.  I couldn’t remember my login information.  So I simply searched my name and there I was….evidently it is still “my space.”  I found the little MySpace blog I had written and read it.

Well I looked at the last time that I blogged on myspace and I saw that I predicted it would be fall before I changed anything.  I am proud to say that I am about 4 weeks ahead of what I thought!

This was a truly amazing summer.  So many memories and good times.  Something happened to me this summer that really has made me rethink the impact of every single second of my life.  I tend to think of my life in terms of seasons:  when I was in high school, when I was college, before we had kids, when I was pregnant, etc. . . .

I really hadn’t stopped to think that within those seasons of my life were thousands of seconds.  Some of those seconds were hohum.  Some were thrilling.  Some painful.  Some impactful.  And unfortunately many of the seasons of my life have been filled with wasted seconds.

This summer I ran into a former student.  With piercing in about every possible square inch of the skin of her face, this young lady came up to me and said “Hey Mrs. Buxton…you probably don’t remember me, but I’m Hannah.  I was in your class the morning of 9-11. ”

That was six years ago.  The season of my life was “before we had kids.”  This season was filled with many painful seconds as we struggled through three miscarriages.  Many seconds were spent flying by the seat of our pants (which ends as soon as labor begins!).

I’m sure there were many wasted seconds. . .  However, there was one very important and impactful second during this season of my life and it occurred the morning of 9-11.

I was just arriving to school when I heard of the first tower collapsing and had to compose myself to lead a class of impressionable 7th graders.  I couldn’t even speak.  The days lessons were put on hold.  I simply sat at my desk and listened to the radio as my students sat and listened with me.

I remember that most of the time that morning was spent with me eyes closed.  Without thinking of the legality of my words, I suggested that my students pray because that was what I would be doing.  There was an occasional question from a student, but for the most part there was a gripping silence except for the radio commentator’s voice.

Who will ever forget the words, “The second tower is now collapsing?”  In that second, I grabbed my Bible and began to read.  Yes, that was totally illegal, but in that second there was nothing else for me to do.  What else was there to believe in that second?

Is that the memory Hannah had?  I hope it is.  I remember my mom and dad telling me they remember the teacher and the class they were in when JFK was shot.  I remember exactly were I was the second I heard that Reagan had been shot and that the space shuttle Challenger had exploded during take off.

Hannah reminded me that life is a series of seconds . . . not just seasons.  It’s so easy to get caught up reflecting on past seasons or looking forward to the next season of life and forget that God created us to live each second of our life to impact others for the kingdom.

If only I could live each second with the faith and boldness that I had that September morning.

In 2001, Joe was the children’s pastor of these sweet kids. This September 11th as young adults, I saw their sadness through Facebook and Instagram as they had to say goodbye to Raven. Praying that their strong foundation of faith will carry them during these dark days. 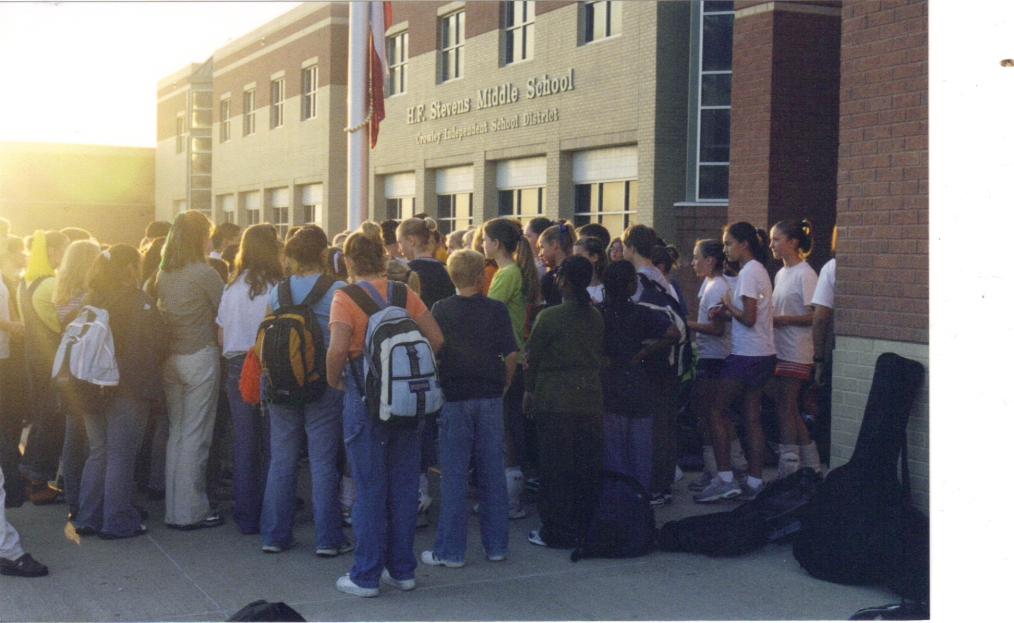 See You At the Pole–2001. That September the flag took on a whole new meaning for these students.

I found this picture in my 2001 box of pictures. 2001 was a tough year for us even before September 11th. Joe and I were estranged from his parents. We had gone through 2 miscarriages. Determined to be ‘more than conquerors’ during the hard times, in August of 2001 we summitted this mountain in New Mexico. A little over a month later the whole world was shaken by 9/11 causing us to cling even tighter to the truth of Romans 8:35-39.

Who shall separate us from the love of Christ? Shall trouble or hardship or persecution or famine or nakedness or danger or sword? 36 As it is written:

“For your sake we face death all day long;
we are considered as sheep to be slaughtered.”

37 No, in all these things we are more than conquerors through him who loved us. 38 For I am convinced that neither death nor life, neither angels nor demons,

neither the present nor the future, nor any powers,39 neither height nor depth, nor anything else in all creation,

will be able to separate us from the love of God that is in Christ Jesus our Lord.